Communication in the aftermath of a disaster is of utmost importance.

In the days following the bombing, law enforcement and rescue officials began each morning communicating with the Oklahoma City community regarding recovery progress. Family members were given a personal briefing each day at the First Christian Church, where they were notified of any new information before the public at large and received updates several times a day on rescue progress.

This direct communication was essential to family members who were still awaiting news of their loved ones. Survivors of the bombing also created networks within their own agencies to keep each employee updated on the rescue and recovery operation.

Governor and First Lady of Oklahoma Frank and Cathy Keating describe the direct communication links that existed during the rescue and recovery process.

Birth of the Oklahoma Standard

The Oklahoma Standard has been defined as a new level of caring. It was first publicly noted when members of the media observed citizens in Oklahoma running toward the Murrah Building instead of away from it. When a need for blood was broadcast, it was soon followed by an advisory to stay home – because more people lined up than were needed. When an announcement was made that work boots were needed at the site, workers pulled up, took off their boots and left them.

Jenifer Reynolds, an anchor for KWTV at the time of the bombing, recalls the droves of people who gave blood after the request was made on local television and the response that became forever known as the Oklahoma Standard.

The legend of the Oklahoma Dollar is based upon a first responder commenting that he was leaving Oklahoma with the same dollar he had when he arrived because, during his entire stay in Oklahoma, he had been unable to spend that dollar. First responders from out of town found that they could not go to a restaurant and pay for their own meals. In some cases, the restaurant owner would refuse their money. Other times, local diners in the restaurant would pick up the ticket.

Working in Tandem with Media

The media served as conduits for information to both those directly impacted and the general population. At the same time, it served as a resource for first responders to distribute information and fulfill needs. In Oklahoma City, the media provided information regarding points of contact for victims, called for specific needs and notified the public when supplies were no longer needed. The Daily Oklahoman produced a special section in the daily newspaper, providing comprehensive information on the incident, including how the public could help.

National journalists saw a new and challenging opportunity to cover terrorism domestically and tried to focus on understanding the bigger picture. Local journalists had an emotional involvement that was not reflected in national journalists’ coverage. For local journalists, it was personal. Still, each unique perspective was important to the story, and more can be found on these differences in the Memorial Museum’s Reporting Terrorism special exhibit.

The bombing provided unique and completely different perspectives of how to cover a crisis.

Dave Lopez, president of Southwestern Bell at the time of the bombing, speaks of the herculean effort it took to get rescuers cell phones and access via a temporary cell tower.

During the rescue and recovery process, government officials met with Southwestern Bell, to solicit their assistance with Computer Aided Design. Accurate floor plans, and a three-dimensional model of the building both before and after the explosion were needed for rescuers to more accurately predict victim locations. Southwestern Bell provided hardware, software and trained personnel to input the data. A similar three-dimensional representation of the building and the blast can be found in Chapter 6 of the Memorial Museum. 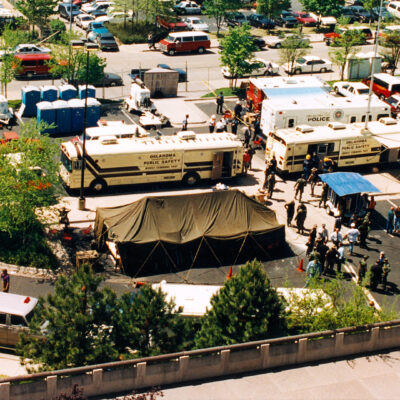 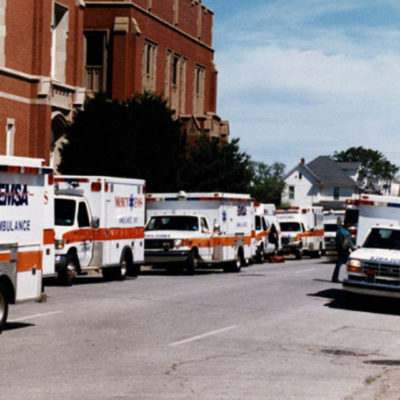