No one can predict the future, but you can prepare for every conceivable eventuality.

No One Can Predict the Future, but You Can Do Your Best to Prepare for It

None of us could have predicted what occurred on the morning of April 19, 1995. However, many local agencies had prepared for various crises – and that willingness to prepare for the unexpected led to a unified response to a chaotic situation.

Immediately following the bombing, Oklahoma City Fire Chief Gary Marrs implemented the Incident Command System (ICS). The Oklahoma City bombing was a proving ground for use of the ICS in a major event and ICS is now the mandatory structure in any incident being worked under the Federal Response Plan. The federal response is now known as the National Incident Management System.

This unprecedented event called for seamless cooperation between federal, state and city agencies – as well as coordination with first responder groups.

James Lee Witt, former FEMA director, explains how federal, state and local government agencies came together in the aftermath of the bombing.

Frank and Cathy Keating, former Oklahoma governor and first lady, discuss the leadership and cooperation of Oklahoma’s first responders. At 9:45 a.m. Governor Keating sent all state non-emergency personnel home and made a verbal declaration of disaster.

Oklahoma City first responders had received training at the Emergency Management Institute in Emmitsburg, MD, and were well versed in the Incident Command System that provides multi-agency, coordinated response in the wake of a disaster.

People from all walks of life – in many different professions – came to help. That same day, rescue workers from as far away as Arizona and New York began flooding into Oklahoma City to help.

It’s difficult to understand why such an atrocity occurred, but what isn’t difficult to understand is the actions of those who responded. Instead of filling people with fear, the reaction was one of pulling people together and helping each other. One journalist captured this when she said her first image of the Oklahoma City bombing was not of people running away from the building but running to the building to help each other.

The public’s support of first responders was overwhelming. Even in the midst of crisis, people came together immediately, started seeing needs and began finding ways to meet those needs. Public expressions of caring and concern were demonstrated through impromptu memorials that appeared near the site. The Oklahoma Restaurant Association – whose trade show was slated to occur that day – abruptly changed its plans and became a massive food service operation for first responders. It was quickly recognized that a family assistance center was needed to play multiple roles – providing information, comfort and psychological support. Public leaders also recognized the importance of mental health services for local school children and the need to hold a memorial service as soon as possible to allow for a time of public mourning. 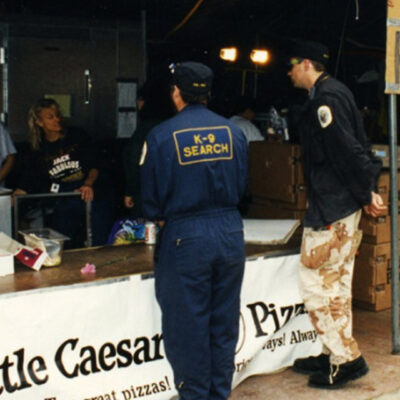