The Memorial Mission Statement is a thoughtful, definitive design for every decision made regarding the Memorial and Museum.

The Memorial and Museum’s Guiding Document

In the aftermath of the April 19, 1995, bombing of the Alfred P. Murrah Federal Building in Oklahoma City, Mayor Ron Norick appointed a 350-member Memorial Task Force charged with developing an appropriate memorial to honor those touched by the event. Members of the Task Force include family members of those killed in the bombing, survivors of the blast and volunteers with expertise in areas ranging from mental health, law and the arts, to fund-raising, business, communications and government.

From summer 1995 until spring 1996, members of the Memorial Task Force conducted a very intensive, deliberate and inclusive listening process to gather ideas from families, survivors and the general public what visitors to the bombing Memorial should feel and experience. Using comments gathered from numerous family and survivor meetings, general citizens meetings and thousands of written and Internet survey responses, the subcommittee responsible for drafting the Mission Statement met for weeks and revised the statement several times based upon comments from the Task Force as a whole.

The Mission Statement was the cornerstone document in shaping the meaning and guiding the design and development of the Memorial. It represents a remarkable community consensus document which evolved under the most difficult circumstances.

The following Memorial Mission Statement was approved unanimously at a meeting of the Advisory Committee of the Memorial Task Force on March 26, 1996. 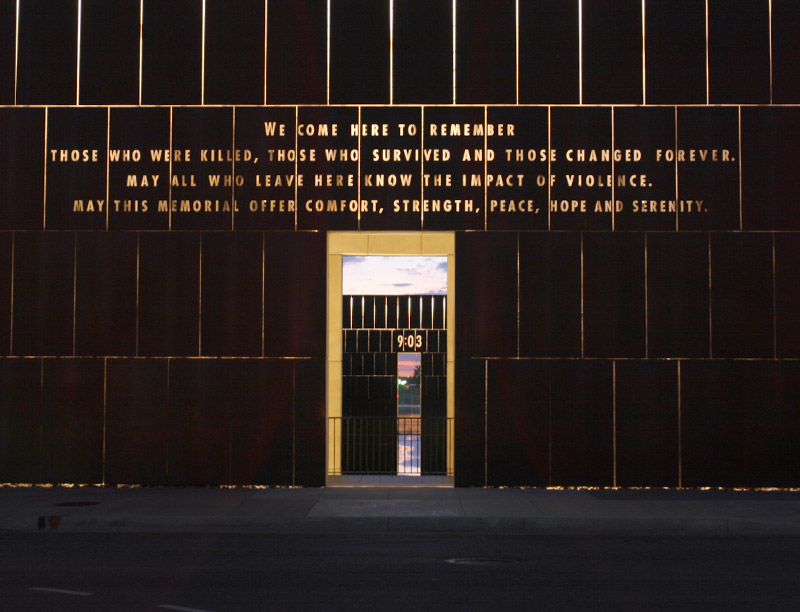 We come here to remember those who were killed, those who survived and those changed forever. May all who leave here know the impact of violence. May this memorial offer comfort, strength, peace, hope and serenity.

Few events in the past quarter-century have rocked Americans’ perception of themselves and their institutions and brought together the people of our nation with greater intensity than the April 19, 1995, bombing of the Alfred P. Murrah Federal Building in downtown Oklahoma City.

The resulting deaths of 168 people, some of whom were children, immediately touched thousands of family members whose lives will forever bear the scars of having had those precious to them taken away so brutally.

Suffering with such families are countless survivors, including children, who struggle not only with the suffering around them, but with their own physical and emotional injuries and with shaping a life beyond April 19. Such losses and struggles are personal and, since they resulted from so public an attack, they also are shared with a community, a nation and the world.

But the story of the bombing does not stop with the attack itself or with the many losses it caused. The responses of Oklahoma’s public servants and private citizens, and those from throughout the nation remain as a testament to the sense of unity, compassion, even heroism, that characterized the rescue and recovery following the bombing.

In the aftermath of the bombing, people of all colors, ages, religions and political philosophies reached out in love — from co-workers, bystanders and professionals who appeared almost instantly to help at the site to individuals thousands of miles away who sent letters of support or funds to provide for devastated families.

Within days of the bombing, the Mayor’s office, the Governor’s office, non-profit agencies and citizens of Oklahoma City began to receive suggestions, ideas and offers of donations related to the creation of a memorial.

Mindful of the far-reaching impact of the bombing and aware of the historic nature of the event, Oklahoma City Mayor Ron Norick appointed a 350-member volunteer task force charged with developing an appropriate memorial.

Specifically, the Task Force was called to: ensure that everyone could participate in the planning process; gather extensive input from families, survivors and the public about what visitors to the memorial should think, feel or experience; develop a mission statement for the memorial; carry out a design-solicitation process based upon objectives in the mission statement; and recommend to the Mayor and Oklahoma City Council a plan for design, construction, administration and maintenance of the memorial, including citizen oversight during the construction.

The Task Force includes 11 subcommittees, each responsible for researching and forming recommendations related to different components of the memorial development process. Reports from two such subcommittees are the foundation for this Mission Statement.

The Families and Survivors Liaison Subcommittee and the Memorial Ideas Input Subcommittee spent eight months gathering ideas from family members of those killed, survivors and the general public across America and throughout the world regarding what the bombing memorial should strive to accomplish.

By summarizing the reports as part of this Mission Statement, the Mission Statement Drafting Subcommittee wished to stress the importance of the public idea-gathering process in development of the Memorial and, most important, reinforce the families’ and survivors’ wishes in shaping the meaning of the memorial.

First and foremost, the Memorial shall honor and respect the work of the Families and Survivors Liaison Subcommittee and the Memorial Ideas Input Subcommittee, and shall reflect the priorities identified by the subcommittees in their reports.

Second, the Memorial shall comply with two resolutions passed by the Memorial Advisory Committee. These resolutions concern an information center and inclusion of a tree, and they are summarized in the section of this Mission Statement entitled “Guidance: Resolutions.” Their full text is provided in Appendices C and D.

Third, the general site for the overall Memorial Complex should include the Murrah Building block, the south half of the Journal Record Building block, including the Oklahoma Water Resources Board Building and the Athenian Building, and Fifth Street between the two blocks.

Finally, it is the wish of the Memorial Task Force that, after completion of the Memorial and Memorial Complex, the entire facility be designated as a National Monument to be operated and maintained by the National Parks Service. Such an arrangement is seen as the best way to ensure perpetual high-quality care for a Memorial Complex of national and historic significance.

After eight months of conducting public surveys, community meetings and small group discussions to gather ideas about what the Memorial should evoke, Task Force members found that the hopes of the general public mirrored almost identically those outlined by the Families/Survivors Liaison Subcommittee.

The result is a description of what visitors to the Memorial Complex should feel, experience and encounter. Participants made a solid effort to avoid discussing what the Memorial should look like, feeling deeply that talented designers were better qualified to suggest meaningful ways to evoke feelings and create memorable experiences. 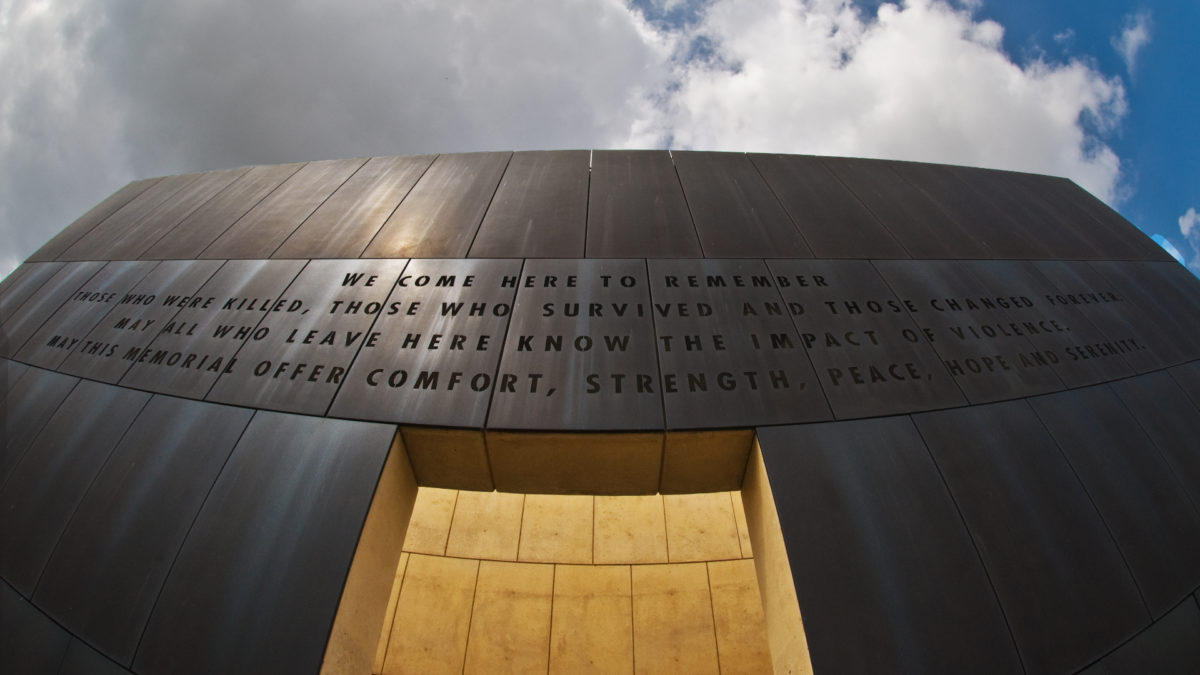 Families, survivors and the public wish for the Memorial Complex to be a place of:

The Memorial Complex should have on the site where the Murrah Building stood a beautiful universal symbol as a Memorial focusing on victims and survivors of the April 19 blast. The symbol should be enduring in its form and content, and it should be appropriate to the culture and environment of the Oklahoma City community. Visitors to the Memorial Complex should develop an understanding of victims and survivors as individuals with many roles — family members, friends, co-workers and neighbors. The range of cultures, races and ages of those attacked should be evident.

The Memorial Complex should provide a quiet, peaceful setting where visitors have opportunity for reflection. Many participants suggest using natural elements, such as trees, flowers, gardens or water, to create a serene atmosphere.

The Memorial should be powerful, awe-inspiring and convey the sense of deep loss caused by the bombing. By the same token, it should evoke feelings of compassion and hope, and inspire visitors to live their lives more meaningfully. It should speak of the spirituality of the community and nation that was so evident in the wake of the attack.

Families, survivors and individuals across the globe agree that the Memorial Complex should include a special place for children. The Memorial Complex should have a component designed to reach kids on “their level,” both physically and cognitively. The component should help children learn and feel something they can carry with them as they grow and should offer them assurance that the world holds far more good than bad.

The Memorial Complex should provide comfort to visitors and should ultimately offer an uplifting experience – elevating the memory of the dead and survivors and, in some way too, the spirit of those who visit.

The Memorial Complex should include a tribute to those who helped. It should honor professionals who worked to rescue and treat survivors and to recover victims of the blast. Such recognition also should extend to the many volunteers who supported rescue, recovery and medical personnel by providing supplies, food and shelter, as well as emotional and spiritual support. Also, the tribute should honor the spirit of unity that characterized the response of the community and nation following the attack, and it should reflect the sense of pride such responses created. It is important that such a tribute in no way diminish the tragedy, but rather, that it offer an inspiring contrast between the brutality of the evil and the tenderness of the response.

The Memorial Complex should include an information center that records important facts and observations about the bombing and teaches visitors never to forget the event or the people it touched. Educational information should include, among other elements, personal stories about those who died and those who survived (see “Guidance: Resolutions” section for more detail); “before and after” information about the Murrah Building and surrounding areas; and the immediate aftermath of the blast. The educational area should tell visitors about the loss of a sense of innocence and security that can follow a terrorist attack. Such a learning center should be participatory and should instill an understanding of the senselessness of violence, especially as a means of effecting government change. It should convey the imperative to reject violence.

The wishes of the Families/Survivors Liaison Subcommittee are to be given the greatest weight in the Memorial planning and development process. That has been a fundamental philosophy of the Memorial Task Force since its inception.

Ensuring that families and survivors are involved to the greatest degree feasible in development, design, funding, construction and maintenance of the Memorial is one way to honor those who died, those who survived and those who love them.

Memorial Complex designs must comply with the two resolutions of the Memorial Task Force Advisory Committee. The first resolution pertains to incorporating biographies and photos of victims and stories and photos of survivors within a Memorial information center. The second resolution relates to incorporating within the Memorial Complex the “Survivor Tree” located in the south portion of the Journal Record Building block.

Following are pertinent portions of each resolution. Complete text of the resolutions is provided in Appendices C and D.

November 14, 1995 Resolution: Stories and Photographs of Victims and Survivors

IT IS FURTHER RESOLVED THAT the Families/Survivors Liaison Subcommittee, in consultation with the Archives Subcommittee, develop guidelines for format and length of such biographies and stories for distribution to families of victims and survivors.

NOW, THEREFORE, IT IS RESOLVED THAT the Memorial Mission Statement will include a requirement that one of the components of the Memorial must be the “Survivor Tree” located on the south half of the Journal Record Building block.

IT IS FURTHER RESOLVED THAT the Advisory Committee take steps to protect and preserve such Survivor Tree.