Even amidst rescue and recovery efforts, it was clear a permanent Memorial was necessary. In 1996, an International Design Competition commenced.

Soon after the bombing of the Alfred P. Murrah Federal Building, people wanted to express their pain and solidarity with family members of those killed, survivors and first responders. They began to create their own personal memorials. All around the perimeter of the crime scene, spontaneous memorials for those killed or injured began appearing, along with items thanking the efforts of the first responders. The site was adorned with hundreds of notes, banners, beautiful flowers and a menagerie of stuffed animals. Individuals from all over the country begin to respond by sending thousands of unsolicited memorial ideas to Governor Frank Keating and Mayor Ronald Norick. As the months passed, it was obvious that people wanted – and needed ­– to remember.

In the summer of 1995, Oklahoma City Mayor Norick organized a 350-member Task Force to look for ways to appropriately commemorate April 19, 1995. Very early on, it became clear that the Survivor Tree needed to be included. The nearly 100-year-old American elm stood in the parking lot directly opposite the Murrah Building. It survived not only a direct hit from the blast itself, but innumerable pieces of embedded shrapnel. It was a poignant emblem of survival despite tragic circumstances.

On January 16, 1996, the Memorial Task Force adopted a resolution that required the Survivor Tree be included in the final design of the Memorial. By March 26, 1996, the Task Force completed a Mission Statement, with the declaration to create a memorial “… to remember those who were killed, those who survived and those changed forever.”

Following the guidelines set forth in the Mission Statement, Memorial organizers planned and conducted an international design competition. Along the way, they convinced the Oklahoma City council to permanently close 5th Street between Robinson and Harvey – and to make it a part of the Memorial grounds. The city also agreed to purchase and donate several parcels of land for the Memorial. In addition, the city, county, state and national leaders gathered at the Murrah site to sign an unprecedented cooperative agreement called the Intergovernmental Letter of Understanding.

The International Design Competition was the largest design competition ever held at that time. 624 designs from 23 countries and all 50 states were delivered to Oklahoma City. The design boards were put on display, and after a private viewing by families, survivors and first responders, the public was allowed to view and comment on each design. Tens of thousands of people viewed the designs and completed comment cards in just three days. 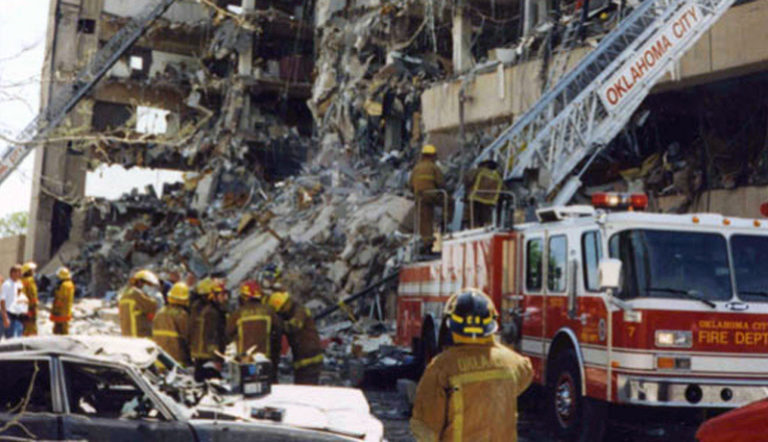 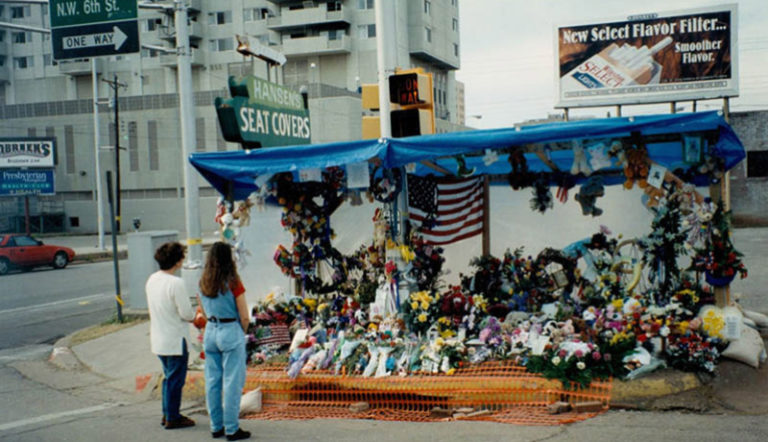 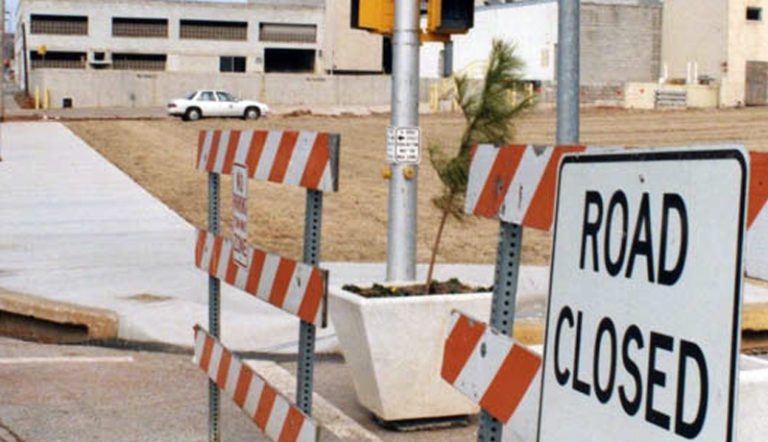 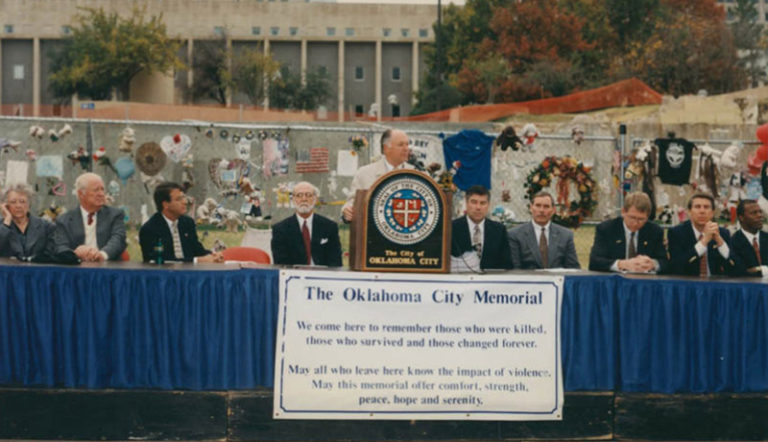 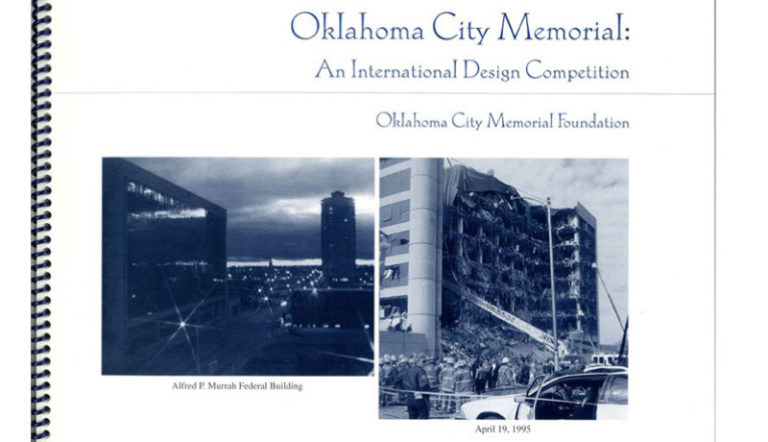 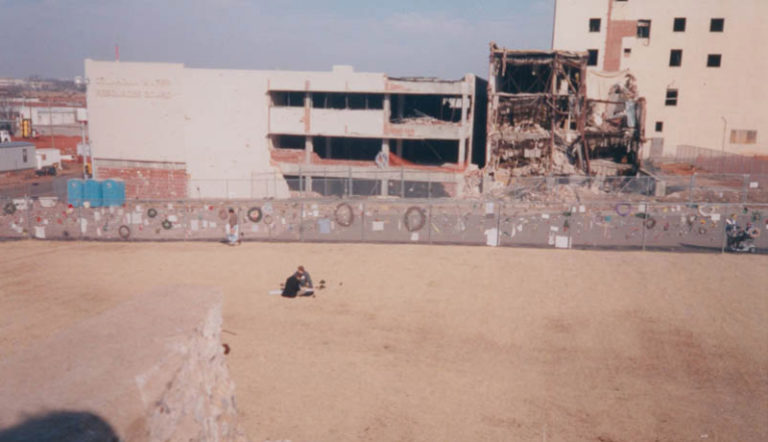 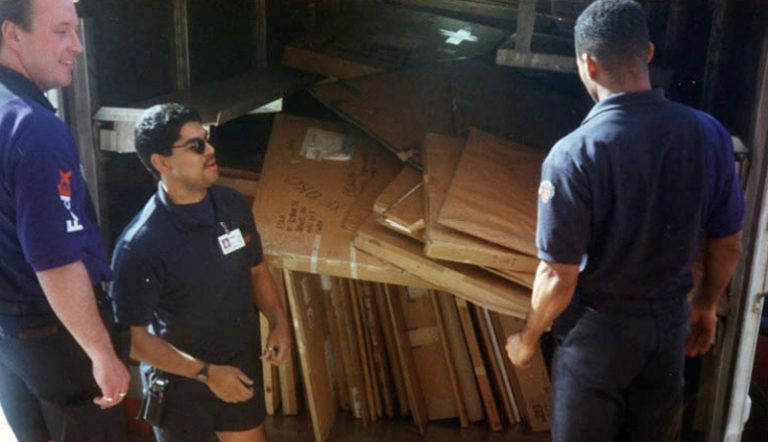 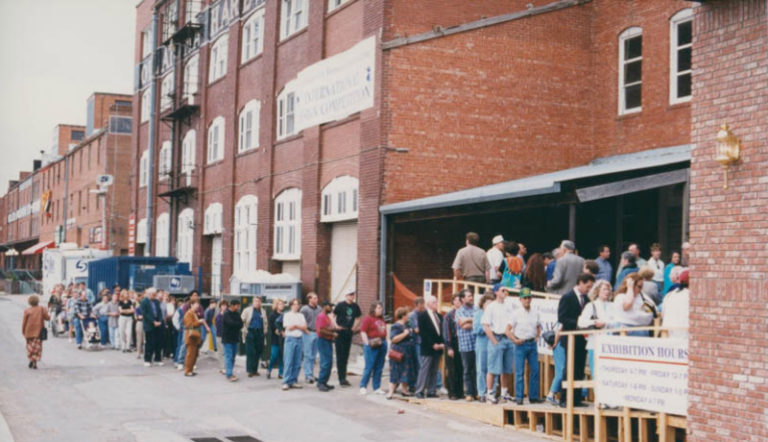 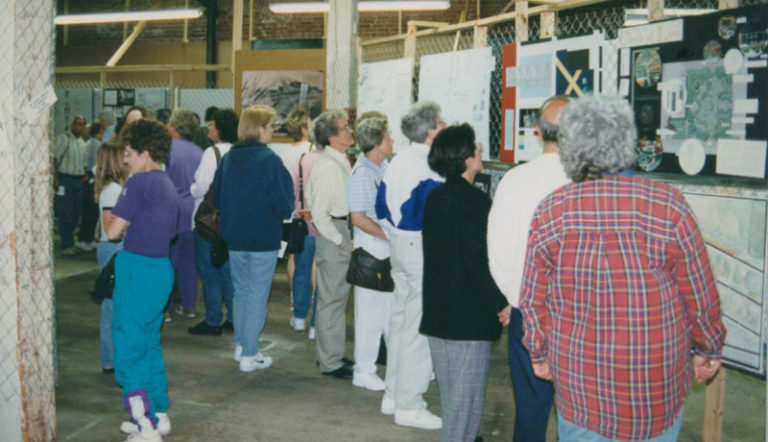 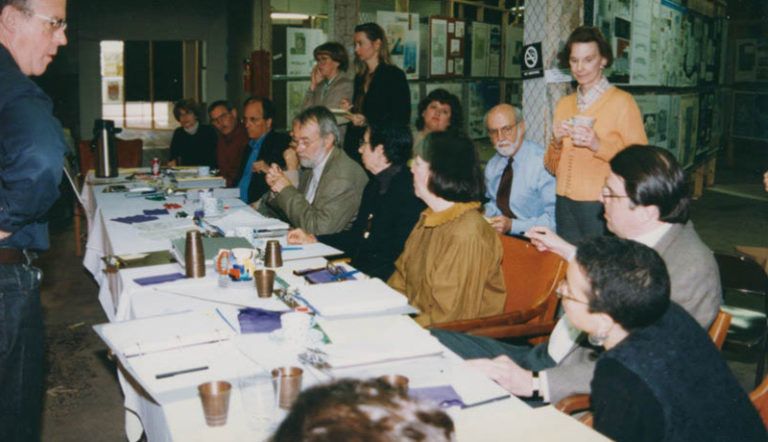 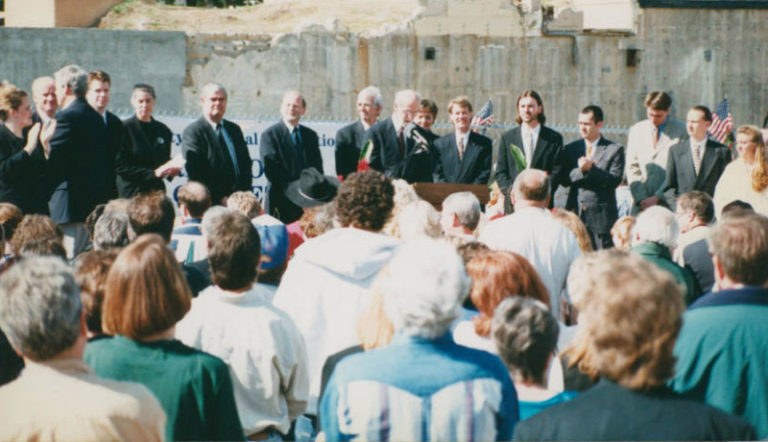 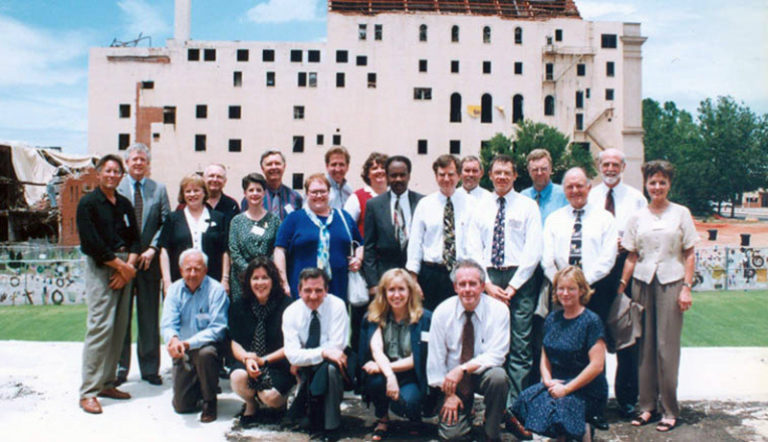 First responders searching for survivors at the Murrah Building shortly after the bombing. 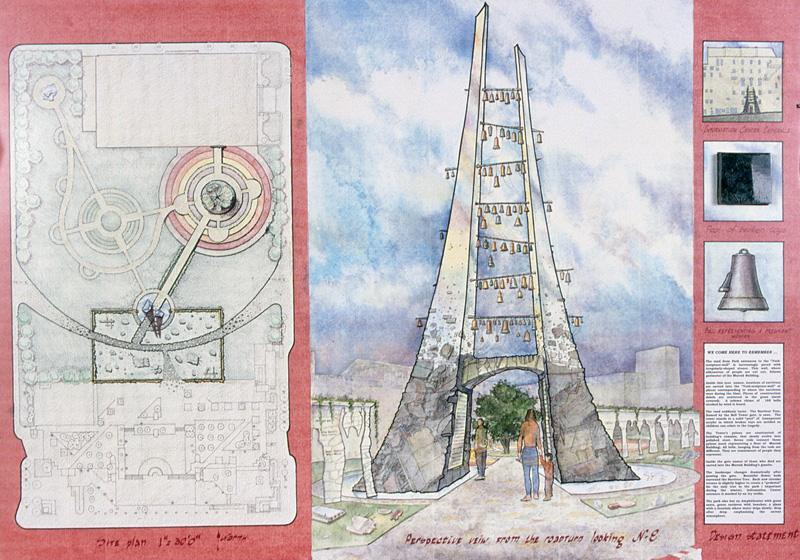 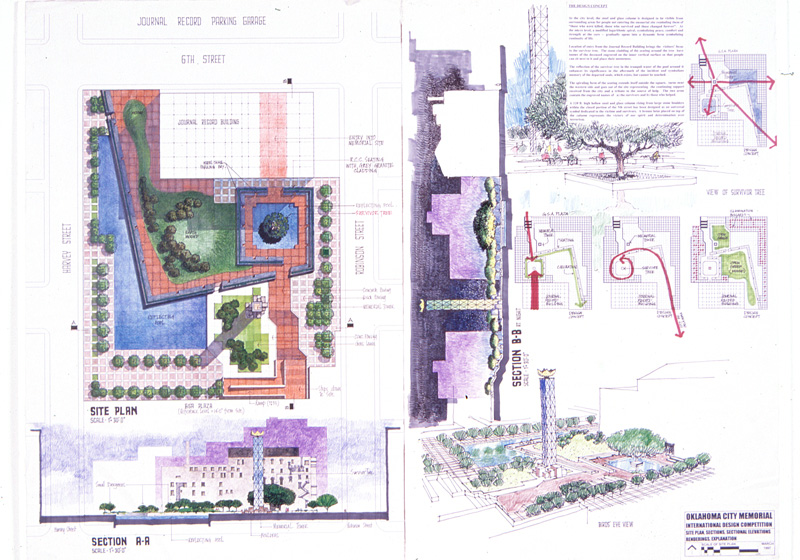 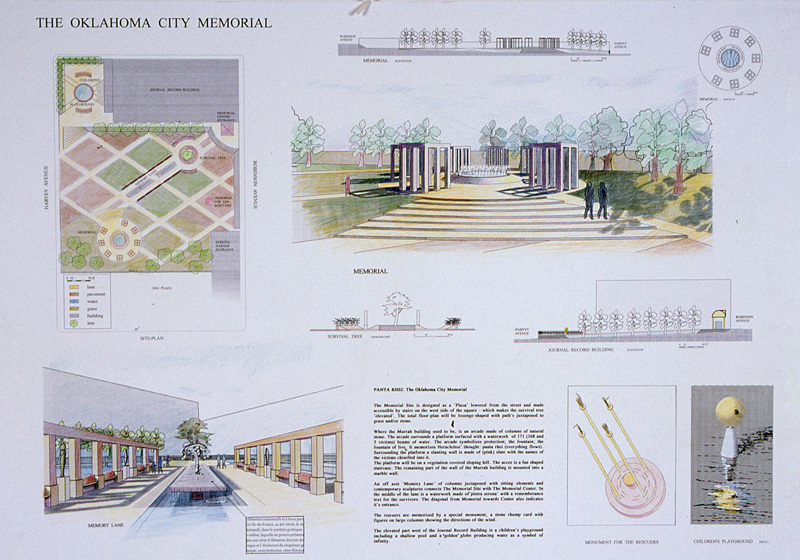 A review committee of architects and design professionals from around the country, along with a committee of family members, survivors and first responders, reviewed the designs and comment cards. Five finalists were selected and announced as part of the second anniversary, April 19, 1997. This selection was the beginning of Stage II of the competition. Each of the five teams were required to create three additional informational boards and a three-dimensional model. Two months later, on June 20 and 21, a private viewing of the additional boards and models for families and survivors was held at Leadership Square. 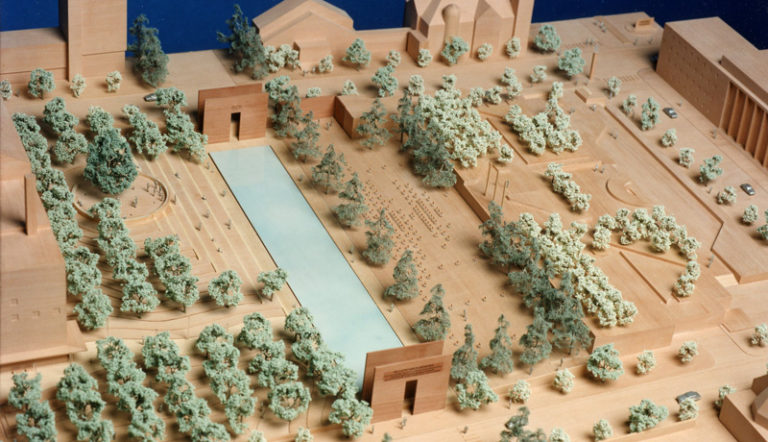 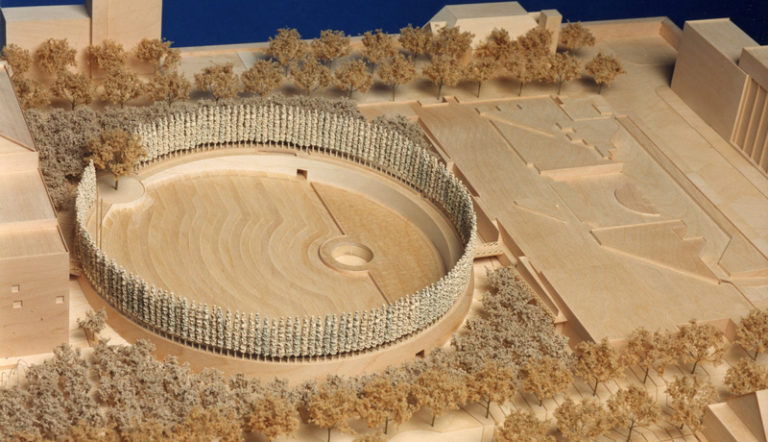 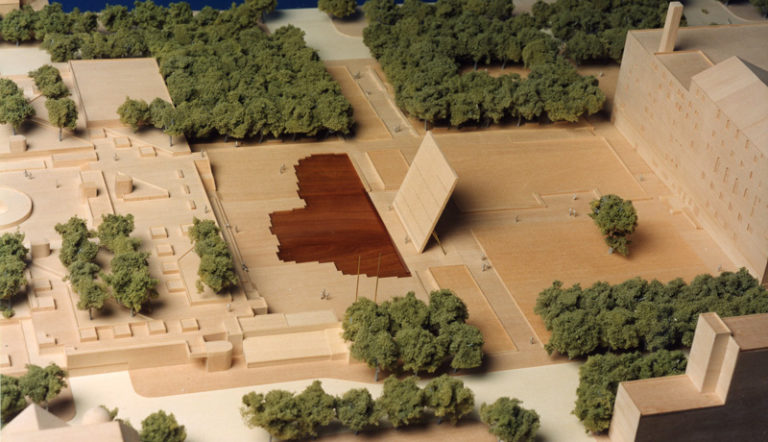 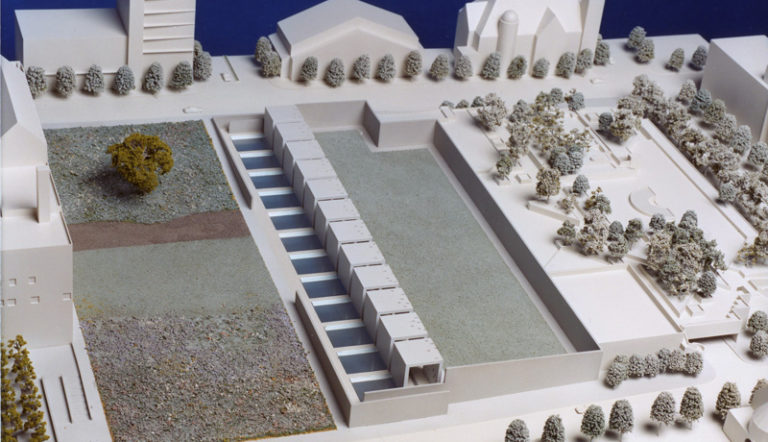 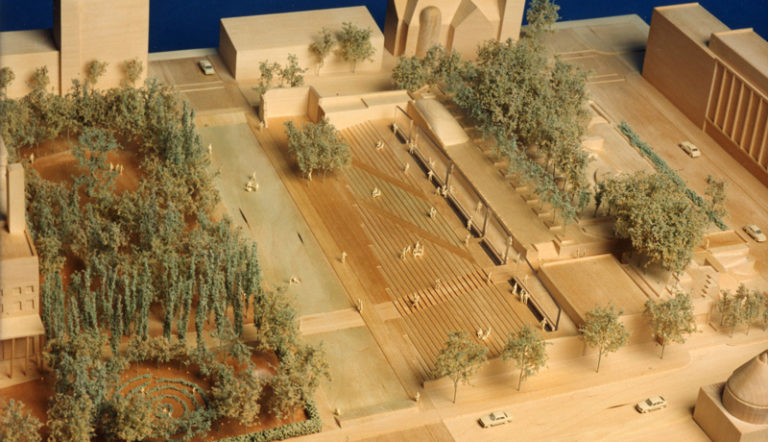 The winning design of Hans and Torrey Butze with associate Sven Berg, Germany.

The winning design was announced July 1, 1997, under the Survivor Tree. Designers Hans and Torrey Butzer, with Sven Berg, were living in Germany when they submitted the winning entry. The Butzers decided to make Oklahoma their permanent home while they worked on the Memorial project.

President Clinton commented on the winning design, “The design is elegant, it is symbolic. A memorial of true power and amazing grace.”

From the very beginning of the memorialization process, committees were drawn from the families who lost loved ones in the bombing, survivors, first responders and volunteers who participated in the rescue and recovery efforts. The inclusive and participatory process was essential to building this sacred place.

The competition provided an equal playing field for all participants and showcased all 624 design boards anonymously so the best and most appropriate Memorial could be chosen. The Outdoor Symbolic Memorial is a place of comfort, strength, peace, hope and serenity where all people can reflect on the love and kindness poured out for a hurting community. It is a testament of remembrance, resilience and unity in the face of evil.

This online exhibit is made possible by funds from 2017 Improving Access to Collections grant.